You are here: Home / Blog / Ways You Can Use Your Reciprocating Saw | Basic Info You need To Know

A reciprocating saw is a portable powered saw which is very popular among woodworker and hobbyists involved in demolition works. It makes the job of cutting and tearing things down much quicker and cleaner.

Reciprocating saws mainly used for straight cuts, pruning, and curved cuts using the up and down motion of its blade. Though its main feature is demolition, it is also famous for its versatility.

In this article, we will learn about the different uses of this amazingly versatile tool. We will learn of things that you never thought possible with a reciprocating saw.

So, let’s not waste any more of your precious time and get to the point.

What is a reciprocating saw?

If you are reading this article, then I will assume that you are fairly aware of many other saws at this point.

Unlike other saws like the table saw, miter saw and scroll saw, which can be used for decorative purposes, the main selling point of the reciprocating saw is to cut or shred wood, metal, and plastic. 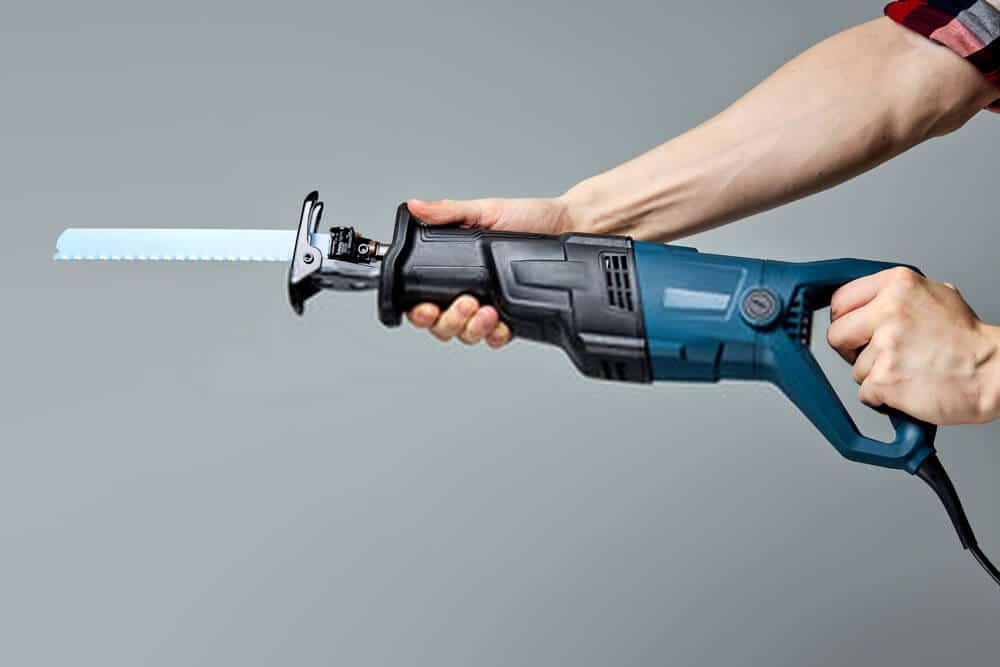 The user just needs to hold the reciprocating saw in place and the back-and-forth moving blade will do the cutting itself. This action provides the desired stability while doing demolition work.

It is used for cutting metals, plastics and wood and is mainly used in construction and demolition work. A reciprocating saw is also a great tool for pruning trees.

Brief history of the reciprocating saw

The earlier versions of the reciprocating saw can be found during the 1940s. Its main purpose was to replace the hacksaw.

A hacksaw did exactly what a reciprocating saw does, but the user needs to move the saw blade manually in order to make the cut in an old-fashioned hacksaw.

People were quite happy with the hacksaw until electricity became mainstream. In this period, many tools started to arrive in order to make lives easier for the working man. 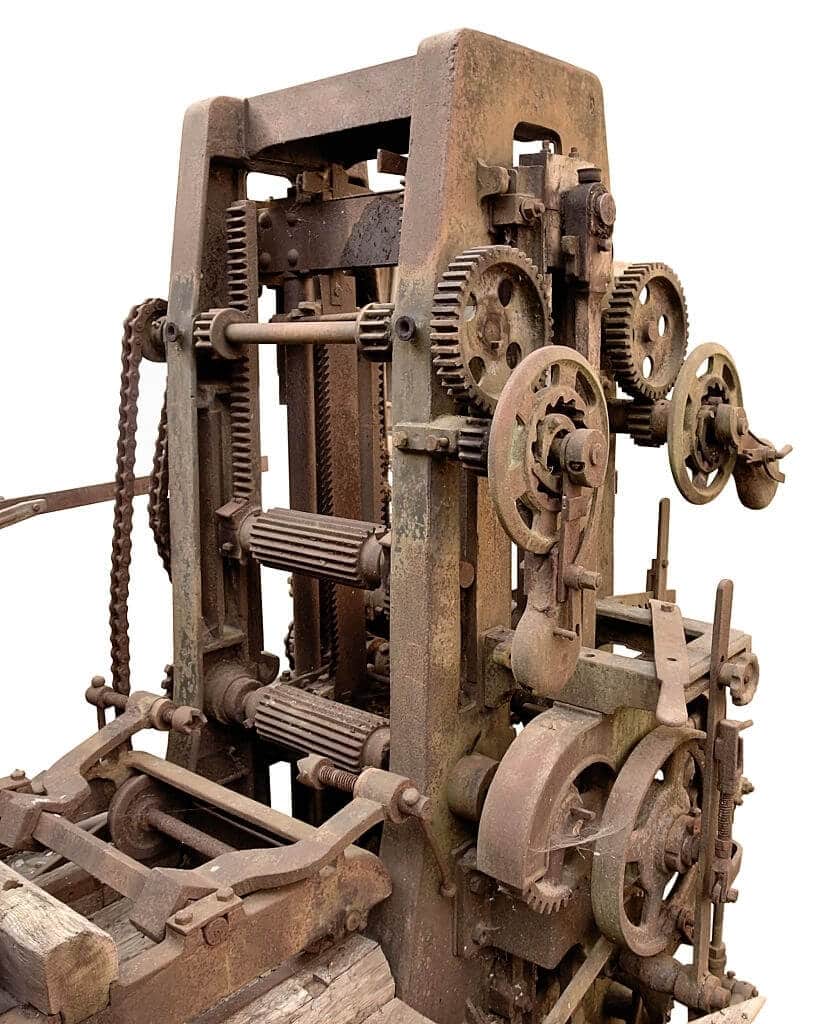 The first right angle saw was invented back in 1949 by the Milwaukee Electric Tool Co. This machine looked quite familiar to the reciprocating saw but in this the blade was aligned downwards.

This tool was created to fulfill the need of plumbers who found this useful for cutting plastic pipes in nooks and crannies where your usual blades struggled to reach.

The right-angle saw’s popularity was only picking up a pace when a new powered saw was introduced by the Milwaukee Electric Tool Co and things were never the same as before. They introduced the “Sawzall”.

The Sawzall reciprocating saw was the first powered hacksaw with the facility to change the blade according to the cutting material. When Sawzall was gaining mainstream popularity, other brands started to emerge with their own version of the reciprocating saw. 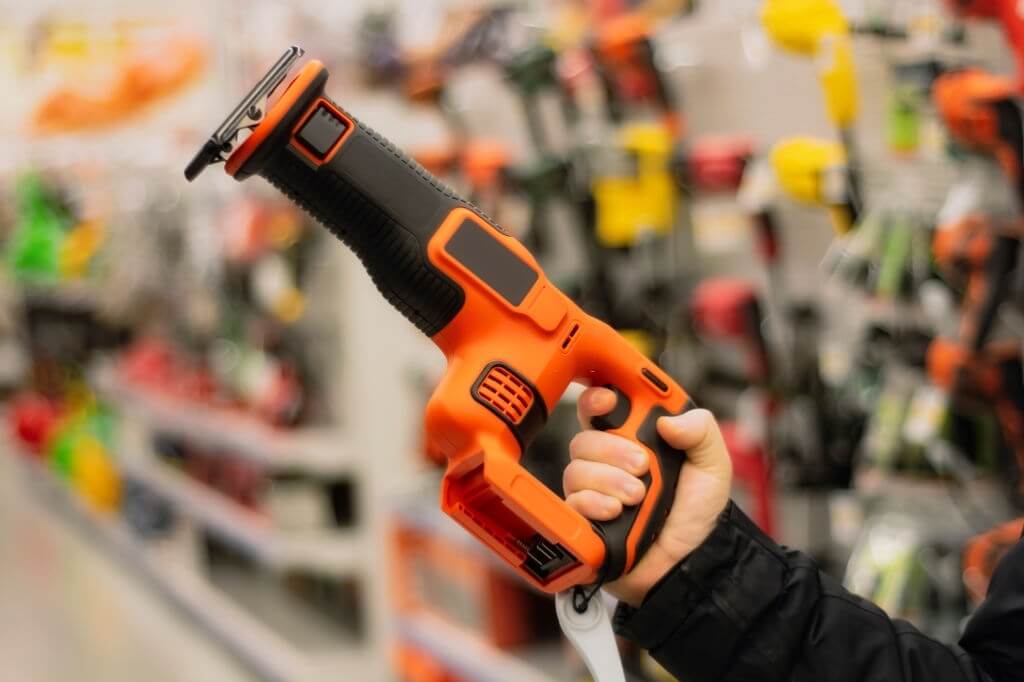 There were names like hogsaw and recipe saw but none of them were nearly as much popular as the “Sawzall”. It became so popular that people started to call reciprocating saws Sawzalls. “Hackzalls” have also become popular in later periods.

These portable ones have become quite popular among those who prefer pruning without any wires trailing behind them.

How does it function?

The reciprocating saw works by moving its blade in a back-and-forth motion very rapidly in order to cut through any material.

This very high cutting motion occurs at over 2700 strokes per minute. With the pressure-sensitive triggers, you can control the cutting speed of the reciprocating saw.

Components of the reciprocating saw

Here are the five main components in a basic reciprocating saw;

The power supply and the power button

This is the most fundamental part of the reciprocating saw which powers the entire device. The power supply will contain the interface from which you will connect it with the power source using a cable. 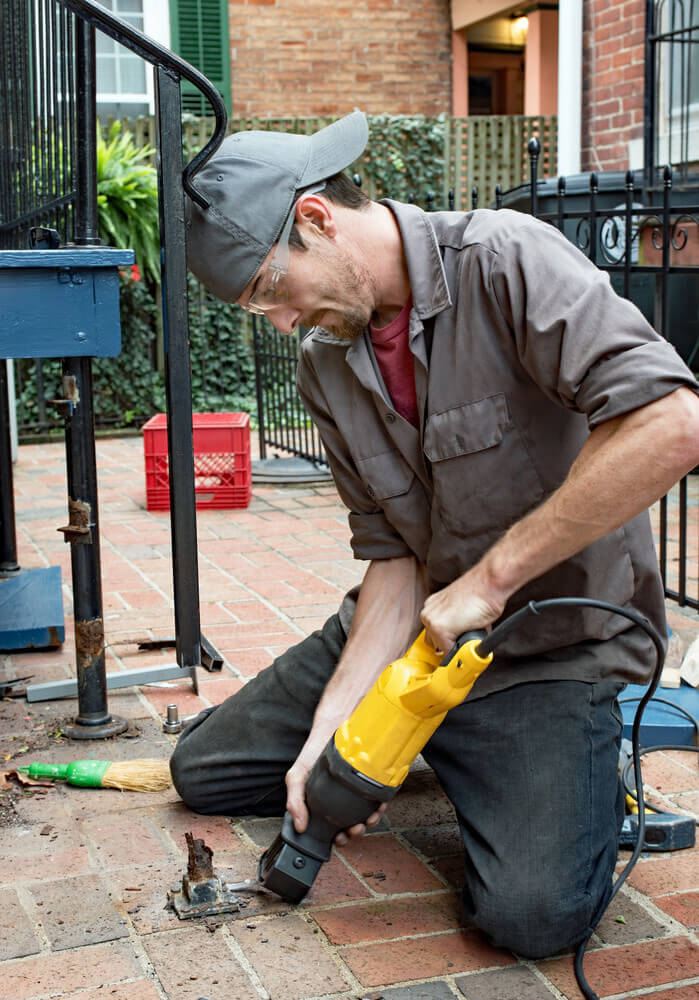 In the cordless reciprocating saws, a.k.a the Hackzalls have batteries installed in place of the power supply unit.

This is the most integral part of the reciprocating saw, without which the saw will lose its function. The blade of a reciprocating saw protrudes from the body and moves front and back to make the cut. 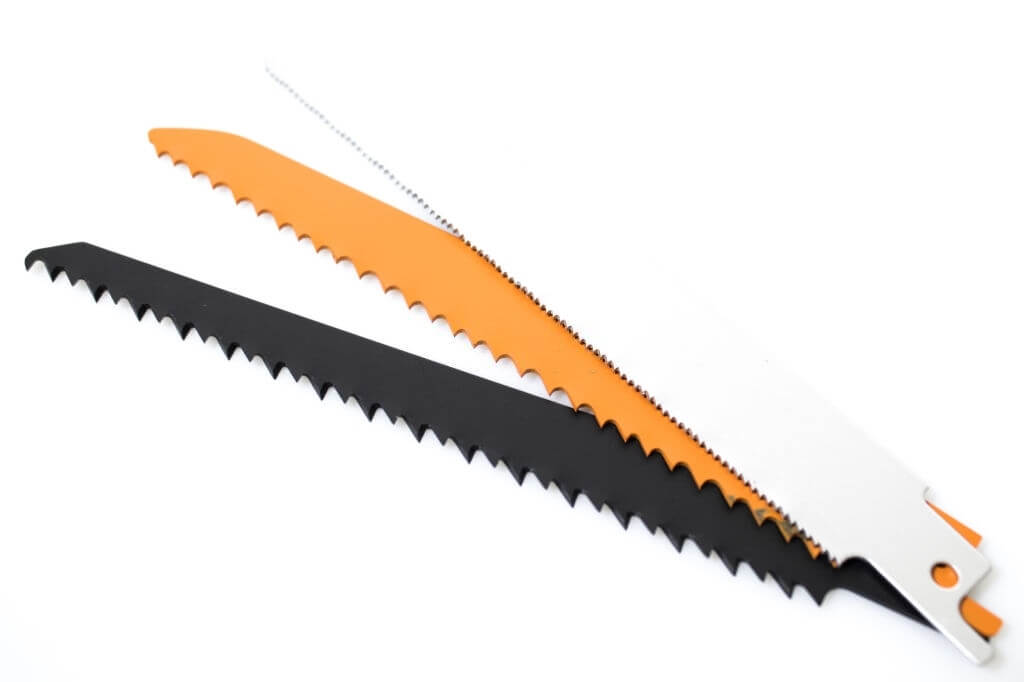 The blades can come in many shapes and sizes and they are easily swappable. This feature lets you change your reciprocating saw to make varieties of cuts. The blade is held in a place of the saw with a clamp.

The clamp holds the blade tightly in place after you have attached it to the inside of the reciprocating saw. There is a small slot in the front of the saw where you will need to install the blade. 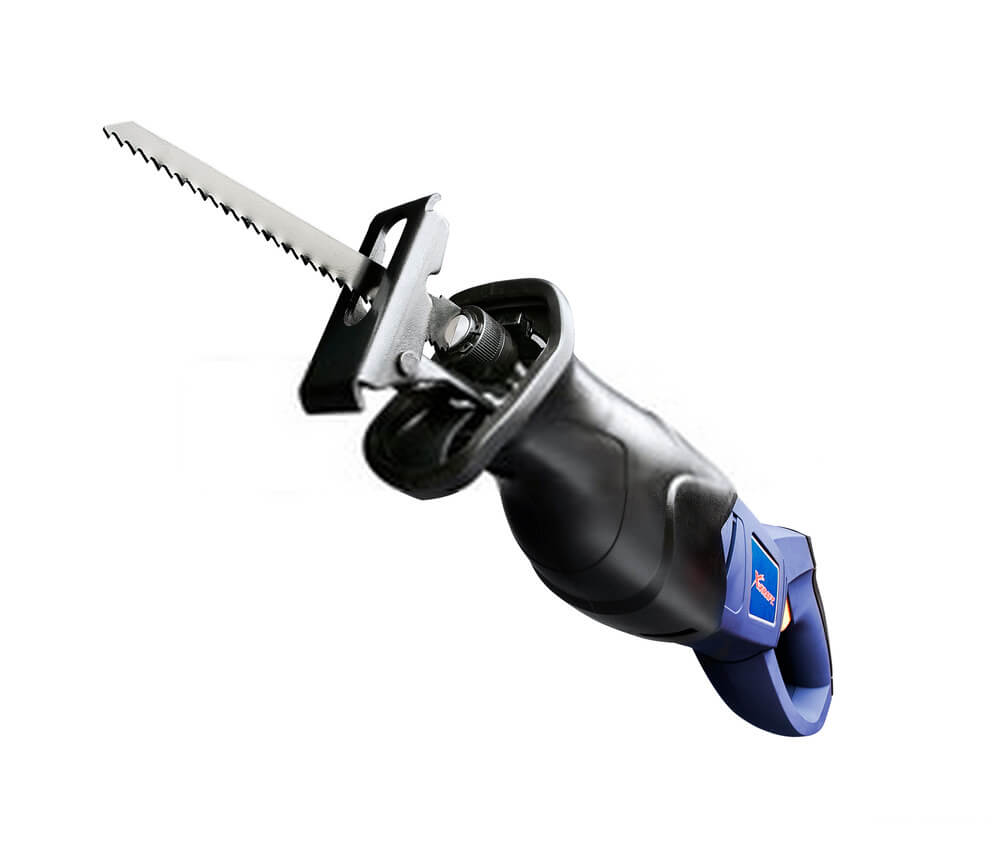 The purpose of the shoe is to set a limit for the blade and acts as a barrier that will stop the blade from cutting through a material after it reaches a certain point. 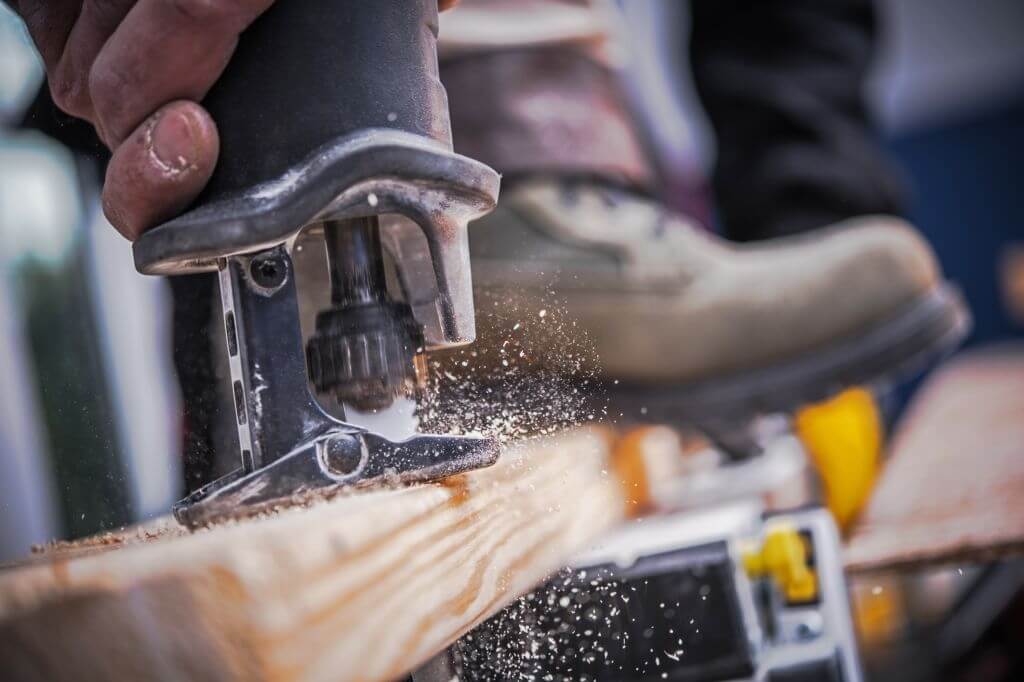 This decides the depth and angle of the cut. When you pull the blade back towards the shoe, the cuts will not be deep and if you let the blade protrude then it will get you a deep cut.

By pressing the trigger, you will power the blades of the reciprocating saw. As you hold down on the trigger, the blade will start moving back-and-forth to start the cutting procedure. 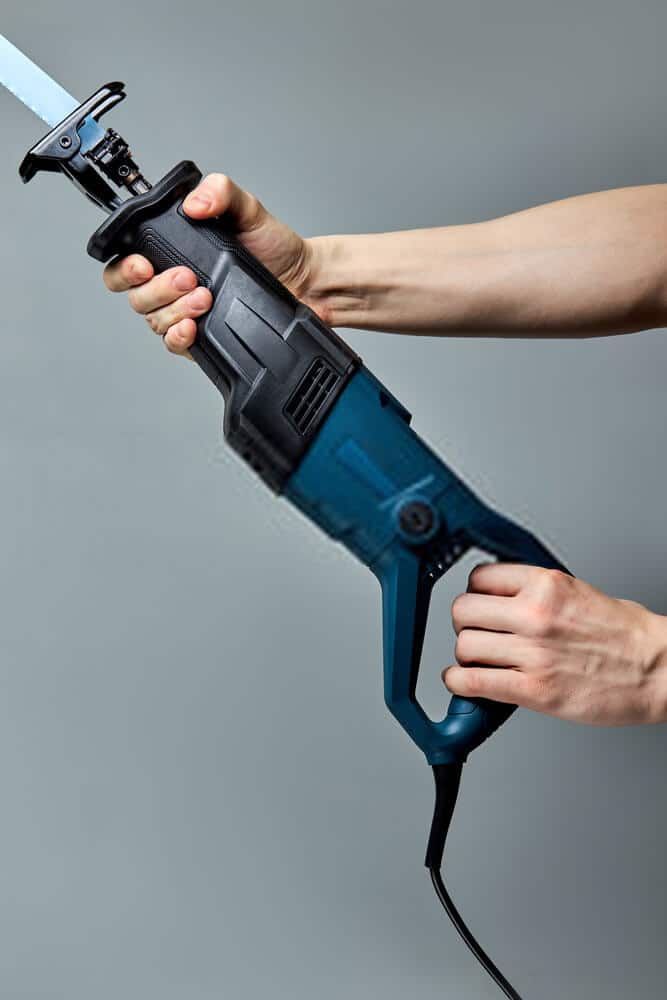 The interesting feature of the reciprocating saw is that the trigger is pressure sensitive. This lets you control how fast the blade is going to move.

You should start the cut slowly and then gradually increase the speed as the blade moves further inside the cutting material.

You will find a grip on the front-side of your reciprocating saw. You hold on to the grip using your free hand, which is not pressing down on the trigger. Its purpose is to make the operation much more stable.

Uses of the reciprocating saw

Now, it’s time to talk about the various uses of the reciprocating saw.

Reciprocating saws are great for landscaping and pruning. The portable reciprocating saws, due to their cordless nature, come really handy to trim down overgrown bushes and make your garden look beautiful.

Plumbing related tasks require cutting through lots of tiny nooks and crannies which are almost impossible to access. Reciprocating saws with the right blade can do these tasks fairly easily. 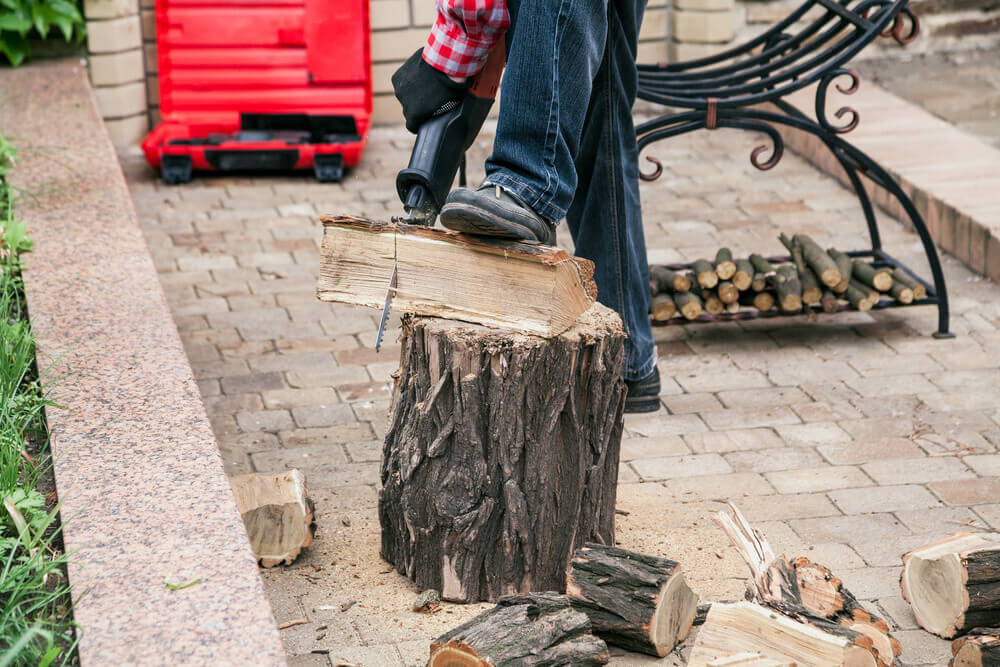 It can easily reach a tight place where it can cut down materials with just a push of a button.

The reciprocating saws can be also be used in Heating, Ventilation and Air Condition (HVAC) works. These also require a user to move inside heating vents and walls.

Suppose, you have to demolish a drywall or studs attached to a wall but you don’t want to damage the opposite side of the wall. 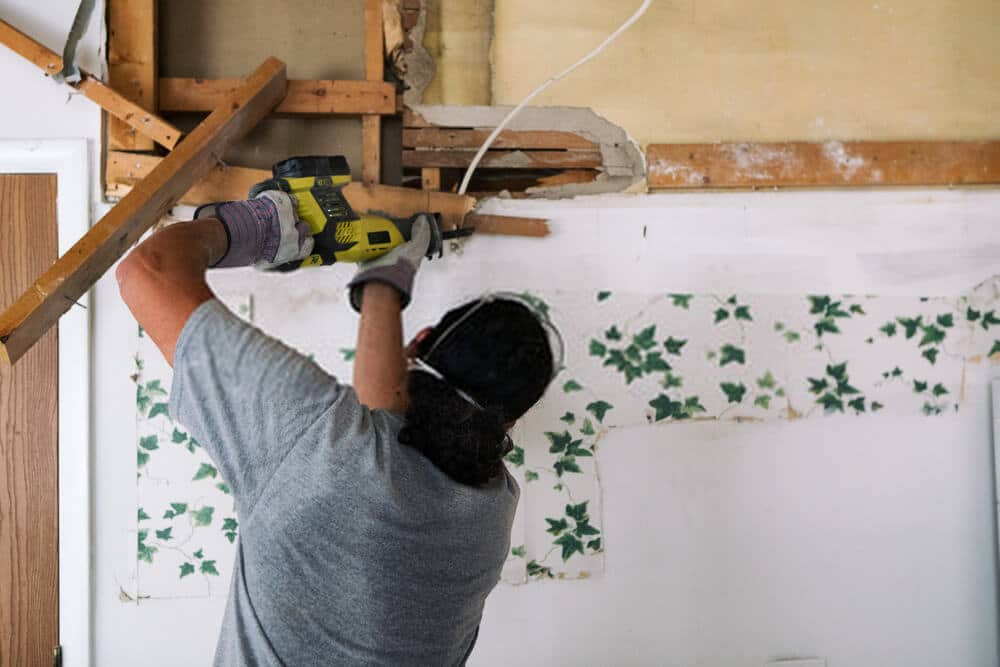 A reciprocating saw can accomplish this task in a pretty neat fashion as its blade can be adjusted to make accurate cuts. This task is impossible to do with any other tools in the market.

It can also be used to remove windowpanes, door frames, and nails from a wall or other surfaces without damaging anything else nearby. 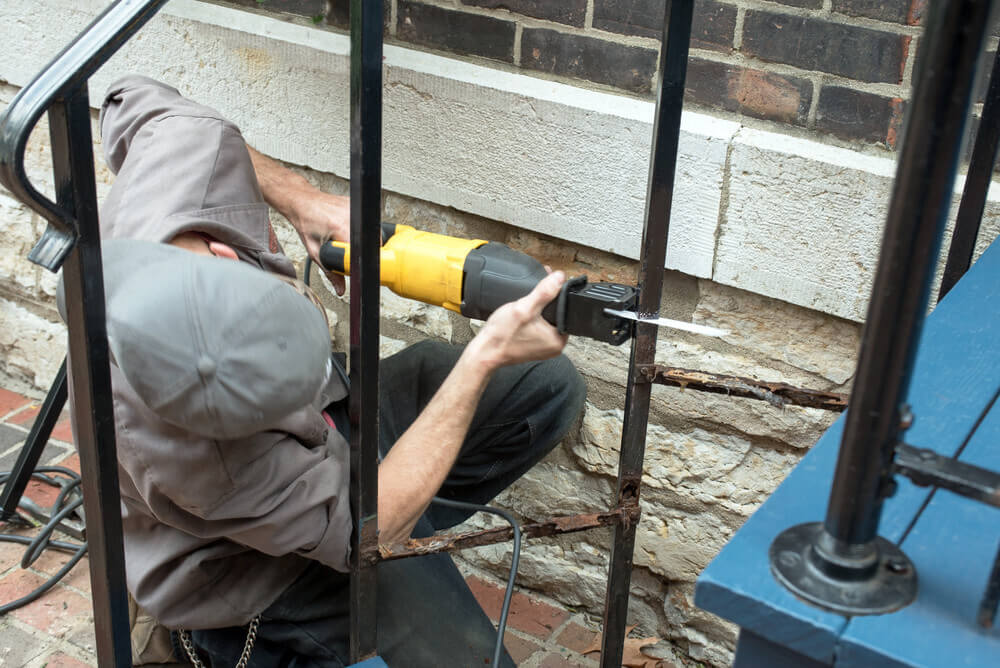 Reciprocating saws are not that great at making delicate or intricate cuts but it is a great tool for making straight and curved cuts.

If you are looking for a portable and economical tool to make basic straight and curved cuts then a reciprocating saw should be your weapon of choice. 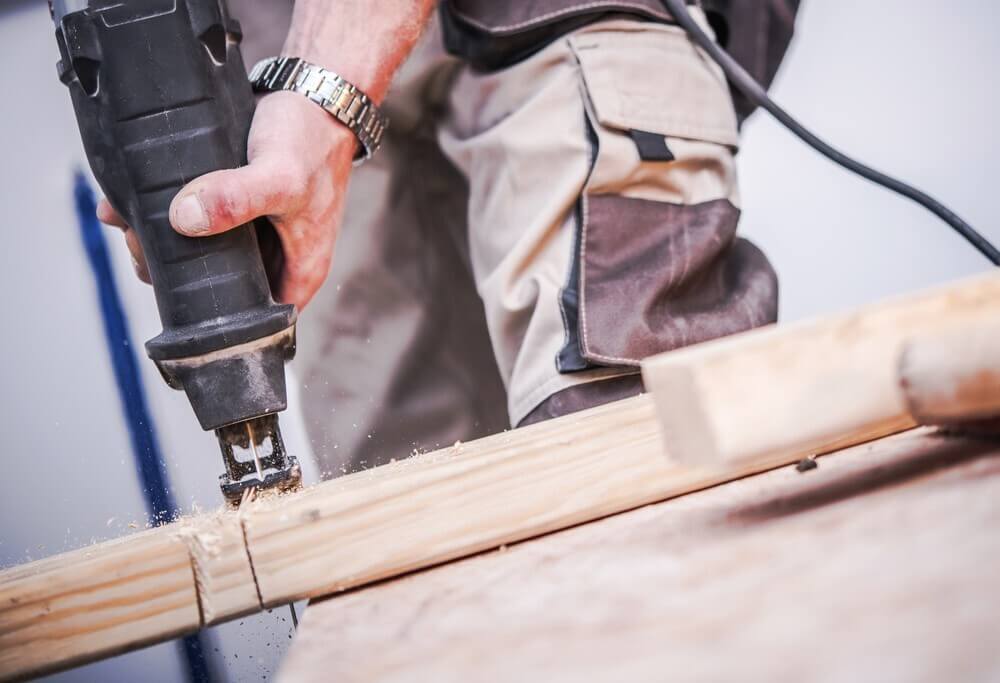 It is as good as other power saws when making straight or curved cuts but the reciprocating saw has one advantage over other saws.

The reciprocating saw can reach and make cuts in tight and narrow places where other tools won’t be able to make.

Sill plate which is also commonly known as sole plate is used underneath a wall and is secured with studs. Sills are an integral part of any construction and it prevents sagged floor. Sill plates can be cut easily with a reciprocating saw by simply changing a blade.

Reciprocating saws are created mainly for demolition jobs. Its longer blade gives an extra edge for these types of works. You can change the blades accordingly to match for different kinds of demolition jobs.

Reciprocating saws are great for creating angled cuts for window framing. Its adjustable blade length and portability allows it to make straight and/or angled cuts on even smaller surfaces. 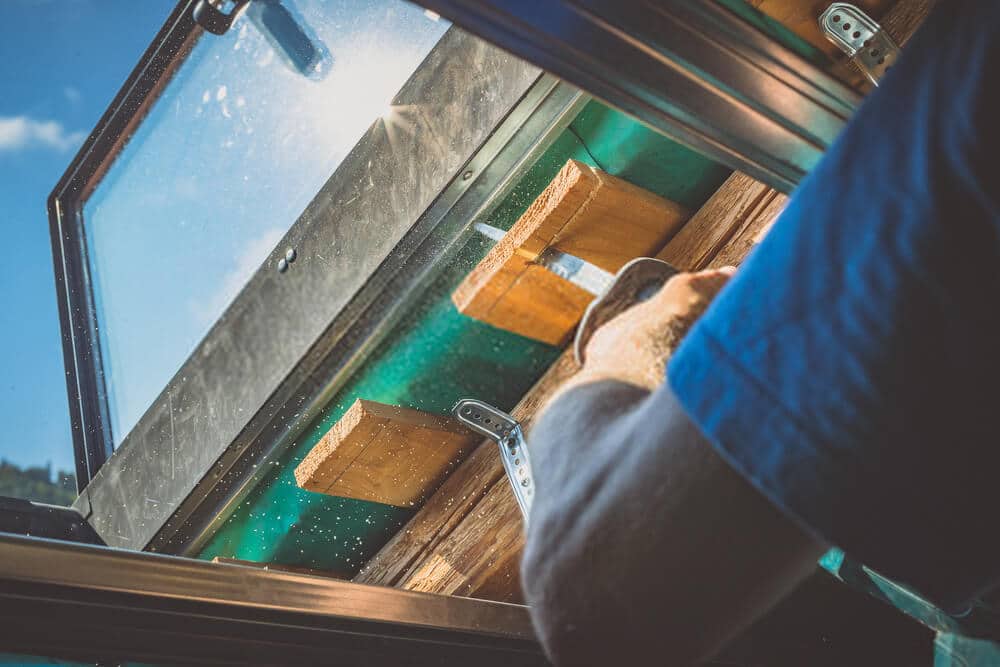 Sometimes you have this piece of wood that is mostly damaged but there are certain portions here and there within the material which can be salvaged.

Using a regular tool like hacksaw, table saw or scroll saw is nearly impossible, but a reciprocating saw can reach every nook and cranny of the damaged material to carve out salvageable pieces.

These salvaged pieces can later be joined together and cut further for decorative purposes.

By changing the default blade into a sanding blade, you can use your versatile reciprocating saw to sand holes in your wooden board.

As the reciprocating saw is highly maneuverable it can reach into the holes with ease and do the sanding to make sure the holes are free of any splinters.

You will be amazed to know the reciprocating saw is widely used in various rescue missions. There will be many times when you have rescue kittens, puppies, and even kids stuck in a tight place where in order to reach and rescue them you need to saw through some structural materials.

In situations like these, a reciprocating saw can save the day. All you need to do is to change to an appropriate blade and you’re good to go.

Whether it is fire rescue or saving people out of a fallen structure, the reciprocating saw will support you every time.

Now that you know quite a lot about the reciprocating saw and how you can use it, you can finally decide whether it is going to be the right tool for you.

It is an economical and versatile saw, which is essential in any workshop. But if you’re especially into pruning or demolition work, then it is a must-have weapon in your woodworking arsenal.

If you want to know more about reciprocating saws or other saws keep following us for more exciting content like this.